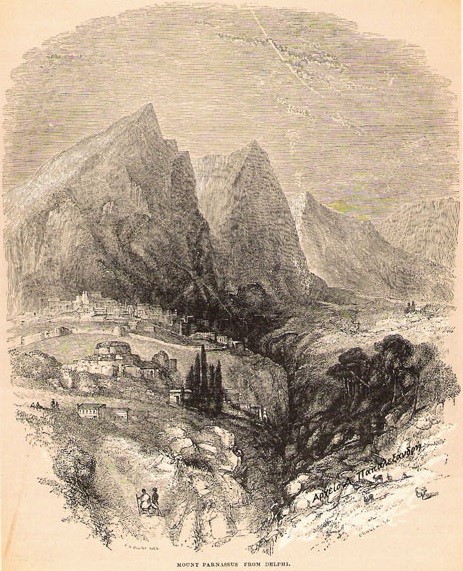 The national park of Parnassus

Parnassus is one of the largest mountainous regions of Mainland Greece and one of the highest Greek mountains. It spreads  over three municipalities, namely of Boeotia, Phthiotis and Phocis, where lies its largest part. Its altitude is 2,547 meters and its highest peak is Liakouras. To the Northeast it is connected to Giona and to the south with Kirphe. Its name is due to the homonymous hero of the Greek mythology, son of Cleopompus (or Poseidon) and Cleodora, who had built on the mountain a city which was destroyed in the Deluge of Deukalion. Etymological analysis, however, shows a prehellenic origin of the name and alludes to the Pelasgians.

The mountain is delimited to the east by the valley of the Boeotian Kephissus and to the West by the valley of Amphissa. The geological particularity of Parnassus is its rich deposits of bauxite, which has led to their systematic mining already since the end of the 1930s, a fact resulting in the ecological damage of part of the mountain.

On the other hand, the significant biodiversity, both in flora and in fauna, led the authorities to the establishment of the National Park of Parnassus already since 1938, i.e. in the year when the systematic mining of bauxite started. The Park comprises a landscape of 36,000 acres spreading on the mountainous region between Delphi, Arachova and Agoriani. Among the endemic flora species under protection are the Cephallenian fir tree and the Parnassian paeonia (paeonia parnassica). In the Park sojourn prey birds and wolves, boars, badgers and weasels.

Close to Arachova there is a ski resort functioning since 1976, with two slides, one in Fterolakka and one in Kellaria.

Myths and legends of Parnassus

Parnassus was considered a sacred mountain in antiquity, possibly second to Olympus. Mythology presents Deukalion and Pyrrha as landing with their ark on its peak during the deluge. Another myth related to the same period relates that the inhabitants of the city built by the hero Parnassus were the only ones saved from the deluge, as they followed the hurling of the wolves and climbed to a height above the level of the deluge waters. On that spot they founded a city which they named Lykoreia. The modern name of the highest peak of the mountain, Liakoura, probably resonnates the former.

The mountain was related to Apollo at a very early date. It was believed that Apollo met Orpheus here and gave him the golden lyre and the gift to pacify the wild animals with his voice and song. Here, again, Apollo killed the Python, the horrible serpent which guarded the sanctuary of the chthonic deities, and acquired the gift of divination, which he transferred to his priestess, the Pythia.

The Corycian cave was a cult place since a very old date and was connected to Pan and the Muses (although, according to another version, the Muses dwelled on Mt. Helicon).

This relation of the mountain to the Muses offered an instigation to its more  recent “mystification”, with the poetic-artistic trend of the 19th century called “Parnassism”. The Parnassic movement was established in France in the decade 1866-1876 as a reaction to Romanticism with a return to some classicistic elements and belief in the doctrine “Art for the Art”, first expressed by Theophile Gautier. The periodical “Modern Parnassus” issued for the first time by Catul Mendes and Xavier Ricard contained direct references to Mt. Parnassus and its mythological feature as habitation of the Muses. The Parnassists, who didn’t exceed a group of twenty poets, exercised a relatively strong influence on the cultural life of Paris, particularly due to their tenacity on perfection of rhyme and vocabulary.  Parnassism influenced several French poets, such as Baudelaire, but it also exercised an influence to Modern Greek poets, particularly to Palamas and Gryparis.

The name of the mountain (Mont Parnasse) was given also to a quarter of Paris on the left banc of La Seine, where artists and  poets used to  gather and recite their poems in public.  Montparnasse is nowadays one of the most renowned quarters of the City of Light and in its cemetery are buried many personalities of the arts and culture.

The geological formation with limestone and schist plaques in different directions is probably the reason why the region of Delphi has so many caves. The largest one is the Corycian cave, dated to the Pleistocene and situated at a distance of 11 klms from Delphi, lying at a height of 1,360 meters. It is surrounded by a fir tree forest. According to Pausanias’ description, a winding path led up to the cave, in which traces of habitation dating to the Neolithic period have been discovered. The Corycian cave was dedicated to Pan and the Corycian Nymphs. It is here, perhaps, that Apollo seduced the Corycian Nymph, according to the myth. Apollodorus, on the other hand, mentions that this nymph gave here birth to her son, Lycorus. Others, however, attribute its name to the stalactites inside the cave, which look like sheepskins (coryces). The cave has two main chambers, and continues to a great depth with a narrow tunnel. The first chamber reaches 50 meters in height and it measures roughly 90 x 60 meters. It is full of stalactites with some stalagmite complexes on the sides. One of these, called Table, has a quite broad top surface and is supposed to have been used by the multitudes of pilgrims for deposing their offerings. The archaeological research of the cave, which was carried out in 1970-71 by Pierre Amandry, yielded thousands of finds, mainly pottery, as well as over 25,000 animal shanks, probably related to some kind of divination. During the Persian attack of 480 B.C. the inhabitants of Delphi resorted to the cave in order to protect themselves, because the narrow and difficult to locate entrance of the cave could easily evade the attention of the invaders.

You can find out more about which cookies we are using or switch them off in settings.

This website uses cookies so that we can provide you with the best user experience possible. Cookie information is stored in your browser and performs functions such as recognising you when you return to our website and helping our team to understand which sections of the website you find most interesting and useful.

Strictly Necessary Cookie should be enabled at all times so that we can save your preferences for cookie settings.

If you disable this cookie, we will not be able to save your preferences. This means that every time you visit this website you will need to enable or disable cookies again.

This website uses Google Analytics to collect anonymous information such as the number of visitors to the site, and the most popular pages.

Please enable Strictly Necessary Cookies first so that we can save your preferences!